Everywhere I look there are hulking red, red rocks and boulders, their rich hues contrasted to absolute perfection by the pure blue of the waters of the Tasman Sea and the cloudless skies, which meet on the horizon and stretch to forever. Disappointment is not an option. - The Australian Traveller 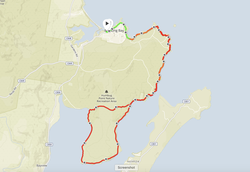 Humbug Point is located just a short drive to the north-east of St Helens and marks the beginning of the Bay of Fires. A region rich in biodiversity, spectacular coastlines and smoothly meandering trails, we feel it is one of the undiscovered trail running gems of Tasmania.

The Humbug route begins in Binalong Bay and follows a weaving coastline trail to Dora Point and the gaping mouth of George's Bay, a narrow inlet which opens into the frequently roaring Tasman Sea. From here you will pass through the Dora Point campground to meet the loop trail around Humbug Point, traversing the loop in an anticlockwise direction. The loop first takes you over an open, dry sclerophyll forested hill to Moulting Bay where pelicans and water birds rest in the calm shallows. The return to Dora Point traverses the coastline to Humbug Point and then through spectacular grass tree forests whilst the distant ocean beaches may be roaring on a wilder day. The final leg of this route retraces your earlier steps from Dora Point to Binalong Bay via the coastal trail, once again passing Grants & Skeleton Point. From these points you will catch glimpes of the northern Bay of Fires, with their white sands and blue water calling to you.  After completion of this route you will be able to enjoy a refreshing swim in the pristine blue waters of Binalong Bay, followed by refreshments at the local cafe. This really is a spectacular place and we hope that you love this route as much as we do!

We wondered how this area got it’s current name. According to the Tasmanian Nomenclature Board, the regions earliest mentions are of 'Point Puzzle', named by a gentleman called  J. H. Wedge, a frustrated farmer who suspected Thylacines of raiding his sheep and lambs.  However, the term 'Humbug' is an exclamation pertaining to "nonsense or gibberish". So how Point Puzzle became known as Humbug Point is quite, well... a puzzle!

The original vegetation of Humbug Point remains remarkably intact, protected inside the Humbug Point Nature Recreation Area. This reserve expands across both Humbug and Bald Hills where proud Eucalypts tower above low grasslands. The region consists of mostly dry sclerophyl forest, although there are also expansive stands of Casurina forests hugging the coastline.  In some protected pockets there are low lying swamps, grass tree stands, and thick banksia fields. This Reserve delivers a truly unqiue trail experience!

About larapuna - The Bay of Fires

The Bay of Fires has long fascinated my imagination: an unfettered coastline scattered with mammoth boulders of rich ochre red and steely blue granite that is lapped (sometimes violently thrashed) by azure waters. - ​Australian Traveller

The Bay of Fires (indigenous name: larapuna) on Tasmania’s East Coast extends from Binalong Bay in the south to Eddystone Point in the north. This unusual name was given to the area by Captain Tobias Furneaux, in 1773, when he noticed numerous fires along the coast. This led him to believe that the country was densely populated. Abundant evidence of this occupation by Aboriginal people can be seen along the coast today.  Whaling was extensively carried out in the area during the 1840s which turned the waters a deep, blood red. Further to this, the coastline is covered by a vibrant red-orange, lichen-covered granite boulders. Therefore, the region really has lived up to its name, 'The Bay of Fires'.
​
From our route's starting point at Binalong Bay, there is a scenic view that takes in the length of the coast right up to The Gardens. This picturesque area was named by Lady Jane Franklin, the wife of Governor John Franklin, who spent some time in the region.

Aboriginal bands who frequented the area called it larapuna - the meeting place for Panpe-kanner, Leener-rerter and Pinter-rairer family groups. A number of Aboriginal midden sites found in the sand dunes containing distinct concentrations of shells and strong evidence of active hunting, gathering and food preparation activities in the area. Today, these sites are significant, sacred areas to the Tasmanian Aboriginal community.

Surveying the landscape it is easy to make the assumption that the Bay of Fires was named for the colour of the rocks I am currently standing on, but the name was actually bestowed in 1773 when Captain Tobias Furneaux, sailing aboard the HMS Adventure, noticed the fires lit by the indigenous people who existed along the coastline. Furneaux didn’t set foot on the land but he did change it forever: the naming of the Bay of Fires was one of the first imprints on the area by Europeans. Furneaux went on to name nearby Georges Bay and St Helens Point, after St Helens on the Isle of Wight. - The Australian Traveller

And then suddenly all is blue as I traverse the last leg into St Helens, the largest town in the area and my base for exploring these parts. A former hub for the whalers and sealers who plied their trade here in the early 1800s, St Helens really came of age when tin was discovered in its surrounds in the 1870s. But the tin mines closed in the early 1990s, and since then St Helens has settled into a slower pace, trading on its natural wonders in a more positive way, through tourism, oyster farming and fishing. The area is not quite sleepy, not really bustling either, but there’s something instantly likeable about it. - The Australian Traveller

The Bay of Fires and St Helens regions were home to early explorers, pastrolists, whalers, tin miners and later, fisherman. The area is richly seeped in history, from the scarred inland areas called 'the moonscape' where past tin mining forays have left eroded undulations in the white quartz sands. The small coves, once home to the whaling communities are now frequented by cray fisherman. And today, the Bay of Fires marks the conclusion of one of Tasmania's most famous mountain bike trails, a 42km descent from The Blue Tier to Swimcart Beach, just north of Binalong Bay.

Between September and November you may see whales off the Bay of Fires Coastline.

The Bay of Fires is part of the East Coast Whale Trail. Humpback and Southern Right whales come sufficiently close to the coast to allow regular sightings.

Seals and pods of dolphins also cruise the area. On the beaches, keep a lookout for hooded plovers, sooty and pied oyster catchers, a variety of gulls and the occasional white-bellied sea eagle. On the inland bays of George's Bay you will likely see Pelican resting.

The coastal heath and dry sclerophyll forest flanking the Bay of Fires provide ideal habitat for a rich variety of native mammals. Wallabies and possums are relatively common in the area. Spotted-tail quolls and Tasmanian devils are much more elusive.

The critically endangered swift parrot can be seen occasionally in the warmer months. They return to Tasmania from Victoria and New South Wales to breed in the blue gum forests in the Bay of Fires hinterland and feed on the nectar of blue gum flowers.
We ask you to tread gently, remembering that we are visitor's to their habitats.

Help larapuna - the Bay of Fires!

There are some active volunteer groups who help to preserve & protect the Bay of Fires. We strongly encourage you to get involved!
Friends of Larapuna (WildCare Inc)