Former Tasmanian resident, Jahn Pahwa instigated the inaugural 'run to collect a badge' back in 2016 with his kunanyi-Wellington Loop. Thanks to Jahn's support and generosity, this 25.1km route has now been incorporated into this Wilder Trails community project. The route begins in Hobart and takes participants to the summit of Mt Wellington before returning to the city. ​

​​The Route
Start and Finish Facilities
​Toilets    No - first toilet is approx. 2km up the Hobart Rivulet Track at Cascade Gardens.
Water    No.
Parking    No. The carpark at the start of the Hobart Rivulet Track is private use only. We suggest parking in a Hobart CBD multi-story carpark or South Hobart and walking to the start location.
Services    Hamlet Cafe is located at the start/finish location. Hobart CBD is a 500m walk and South Hobart shopping strip is an 800m walk.
Phone coverage    Telstra, Optus & Vodafone.
Concluded the route? Don't forget to get your completion badge or lapel pin!
GET YOUR COMPLETION BADGE or lapel pin! 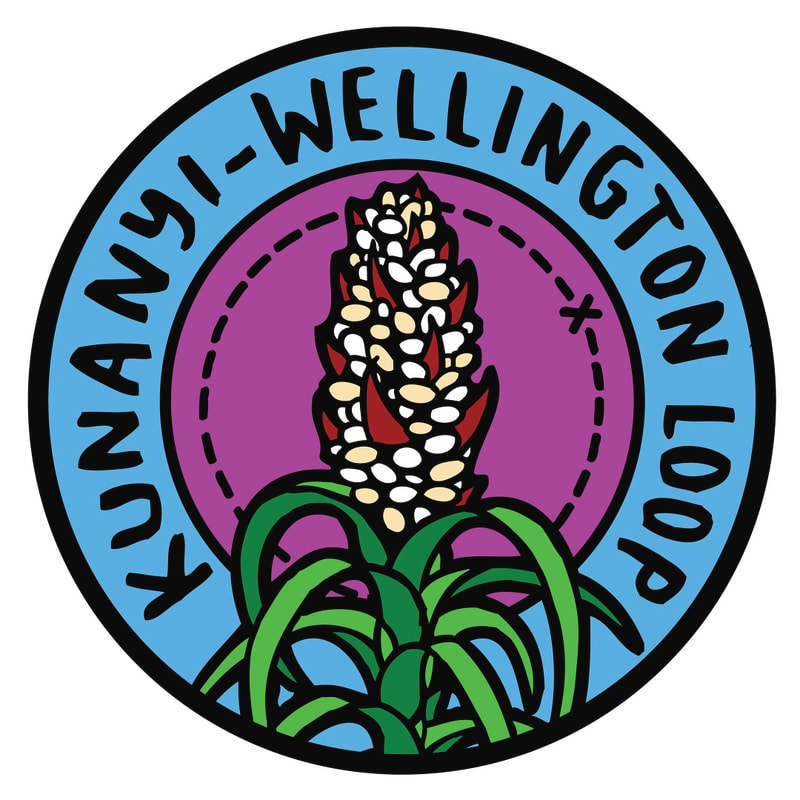 With thanks to Josh Miller for this production showcasing the Kunanyi Loop. Be inspired!

About kunanyi & the Wellington Park

With thanks to wellingtonpark.org.au for access to the following information...

The traditional custodians of kunanyi were the South East Tribe and more specifically, the Muwinina people, and sandstone rock shelters and stone artefacts are visible reminders of their presence.  For the Muwinina people, the area around present day Hobart was their country. They called the mountain kunanyi, a name that has been revived by Aborigines today. Today a high concentration of Aboriginal sites on the Derwent estuary however, there has been no systematic research undertaken in the Wellington Park. We wish to acknowledge and pay our respects to the Muwinina people as the traditional and original owners of this land in which we wish to enjoy, and as the continuing custodians of this land. We wish to acknowledge these Elders - past, present and emerging.

With the arrival of Europeans, the mountain was quickly recognised as a source of clean water, food, timber and tourism. Many artefacts, sites and stories bring the past alive.

​Some of today’s walking tracks date back to the 1830s. However, most of the walking tracks are testament to the strong recreational interest that began in the early 1800s, initially via the New Town Way. Inspired by her visit to the summit in 1837, Lady Jane Franklin had a hut built at the Springs and one on the Pinnacle. These were the first recreational huts in the Park, but a keen movement began. It is likely that early tracks were also used in part by keen naturalists, such as Charles Darwin, who visited colonial Hobart.

Access has improved since then but the road from Fern Tree to the Pinnacle remains a legacy of the hard work of many Tasmanians. Short term prison and free labour built the lower section, beginning work in 1888. The section from the Springs to the Pinnacle, opened in 1937, was constructed as a Depression work for the dole scheme. At the time it was controversial, termed ‘Ogilvie’s Scar’ after the Premier of the day who initiated the development.

You will visit a range of culturally significant sites as you traverse these trails, including crossing Pinnacle Road, enjoying Junction Cabin, and the site of The Springs.
READ MORE

In Wellington Park there are distinct microclimates due to topography, altitude, and access to sun and moisture. Geological activity has resulted in varied soil types, hence, the vegetation across the Park is highly diverse.

Contemporary research has since identified the richness and significance of the Park’s flora. The mountain, in particular, is recognised as one of Tasmania’s richest sites in terms of number of endemic vascular species, with two species being found only in this area. A number of these vascular species have conservation significance because they are poorly reserved, or threatened. On Kunanyi there are a total of 164 mosses, 130 liverwort and 95 macrolichen species, and ten plant communities which have a restricted distribution or are poorly reserved in Tasmania.

​The range of altitude, vegetation and landforms across Wellington Park influences fauna diversity. Consequently, the Park is species rich with many significant communities and threatened species.

We ask you to tread gently, remembering that we are visitor's to their habitats.
READ MORE

Millions of years of geological construction, erosive processes and change have shaped the area to form the landforms we know today. The Park’s geodiversity (that is the range of geological, landform and hydrological processes and soil types) is highly significant in a number of ways.  Water is the main agent of weathering and erosion, carving valleys, creating boulder fields and inducing landslips. The mountain also provides some of the cleanest water on the planet to the residents of Hobart. You will enjoy a range of geodiverse landscapes as you traverse these trails.
READ MORE

French expeditions in the late eighteenth century reported extensive Aboriginal firing of the forests on the foothills of the Wellington Range. Since European settlement severe fires are known to have occurred on parts of the Wellington Range in 1806, 1851, 1897, 1914, 1934, 1945, and 1967. Approximately 90% of the Park was burnt in the ‘Black Tuesday’ bushfires on 7th February 1967. These bushfires burnt 270 000ha across southern Tasmania including the fringe of Hobart. In five hours 1300 houses and 128 major buildings were burnt. Sixty two people lost their lives. Since 1967 there have been major bushfires in the Park in 1983, 2001 and 2013. You will see evidence of these fires as you traverse this route, particularly the impact that fire has had on the tree populations.

The story of George Radford

Do you know the story of George Radford and the significance of his passing? Are you interested to learn more about the informal 27km long 'race as you please' event held in 1903 that lead to a memorial being built in his honour on Mt Wellington? We believe every trail runner will be fascinated by this account...
LEARN MORE

There are some active volunteer groups who help to preserve & protect kunanyi. We strongly encourage you to get involved!
OTHER WAYS TO GET INVOLVED