Located in the Tasmanian Wilde​rness World Heritage Area, the Walls of Jerusalem is a wild and inspiring alpine park with a labyrinth of highland lakes, craggy mountains and elegant stands of pure pencil pine forests. Its stunning landscape of precipitous dolerite peaks, moraines and tarns are the result of glaciation.

The constantly changing landscape is as unpredictable as it is beautiful. The unique alpine vegetation and clean, crisp air of this remote highland region is sure to invigorate and inspire those with a sense of adventure. 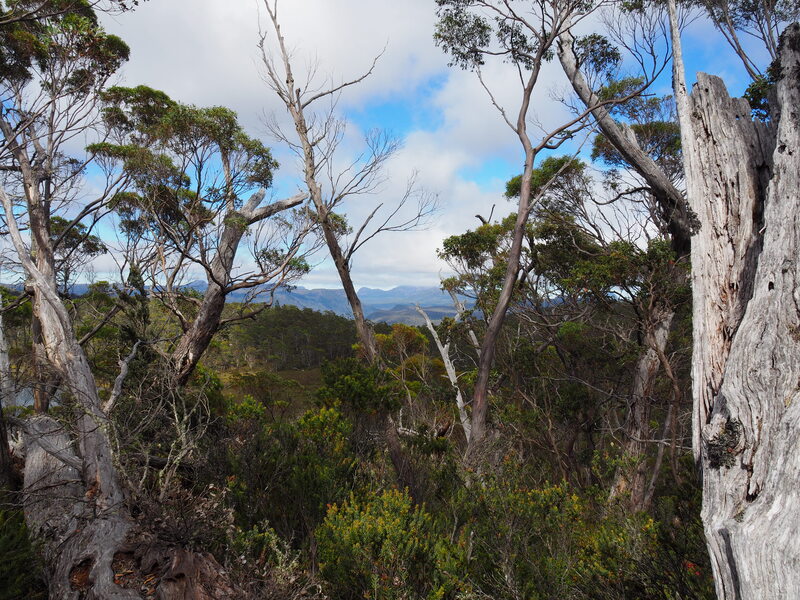 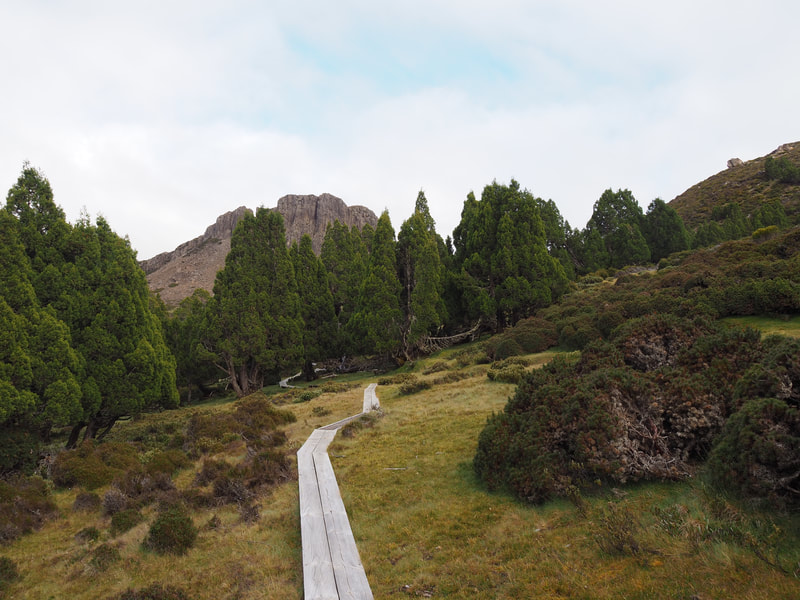 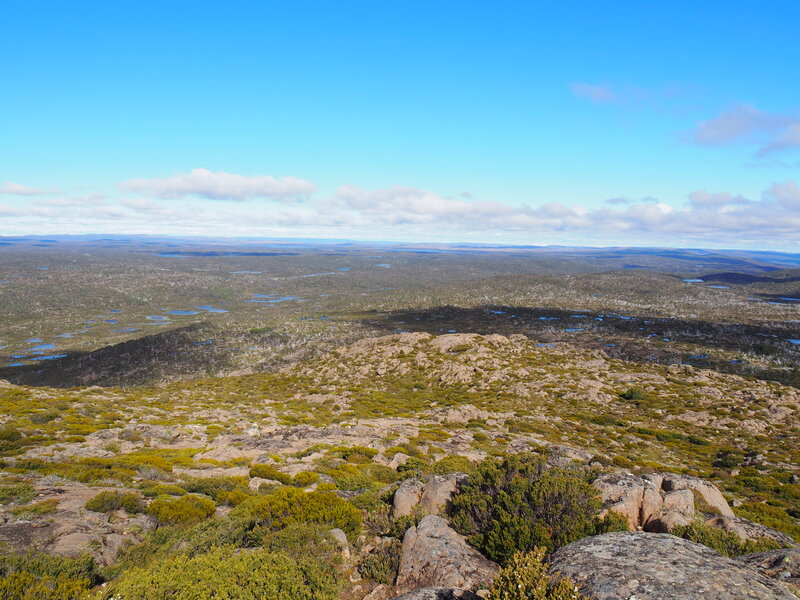 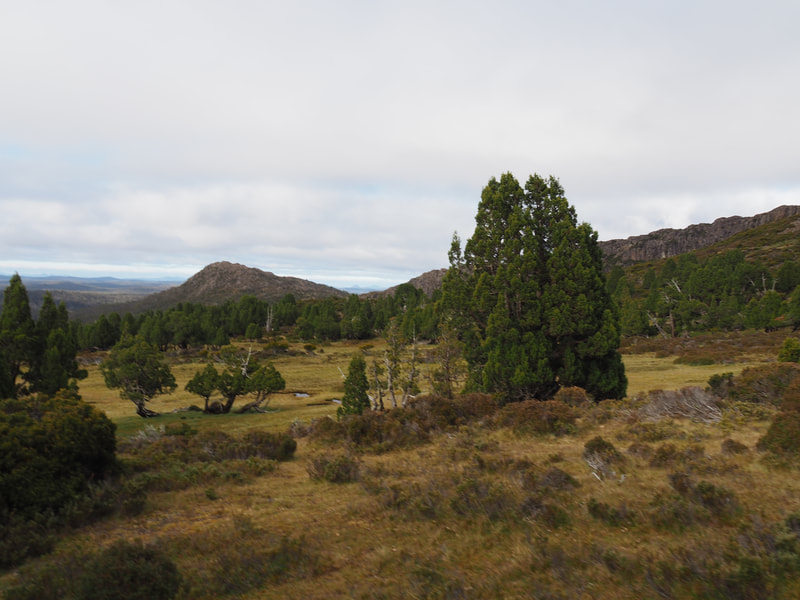 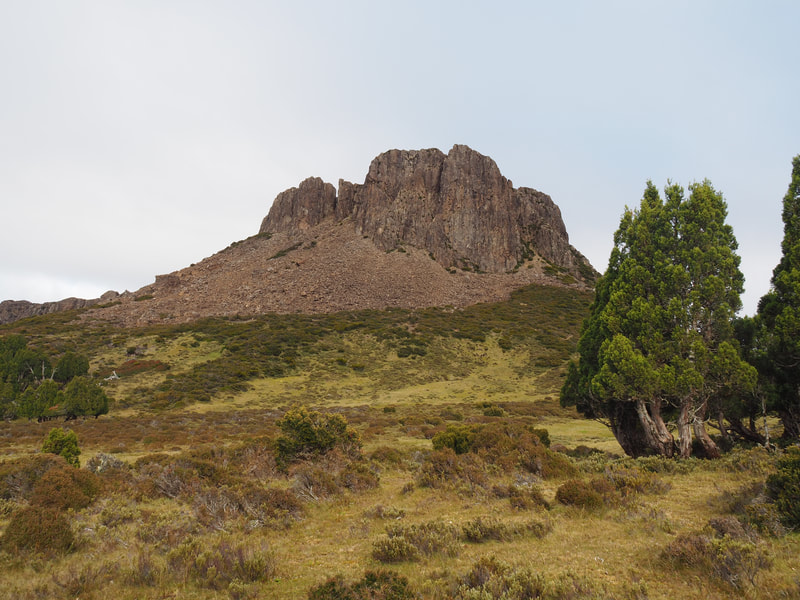 Start and Finish Facilities
Toilets  Yes - at The Walls of Jerusalem Carpark, Wild Dog Creek and Dixsons Kingdom campsites
Water  Not that we would recommend drinking. Please bring your own. Closest water is on the trail well away from the hiking trail and from fast flowing steams or at the Wild Dog Creek campsite. We would recommend treating any water found at the campsite or on the trail.
Parking  Yes - at The Walls of Jerusalem Carpark
Services  The closest services are located at Mole Creek where there are some small cafes and a basic convenience store. The closest large hub with fuel, medical services and supermarkets is Deloraine (approx. 90min drive away).
Phone coverage  Some patchy Telstra reception.
Concluded the route? Don't forget to get your completion badge or lapel pin!
GET YOUR COMPLETION BADGE OR PIN! 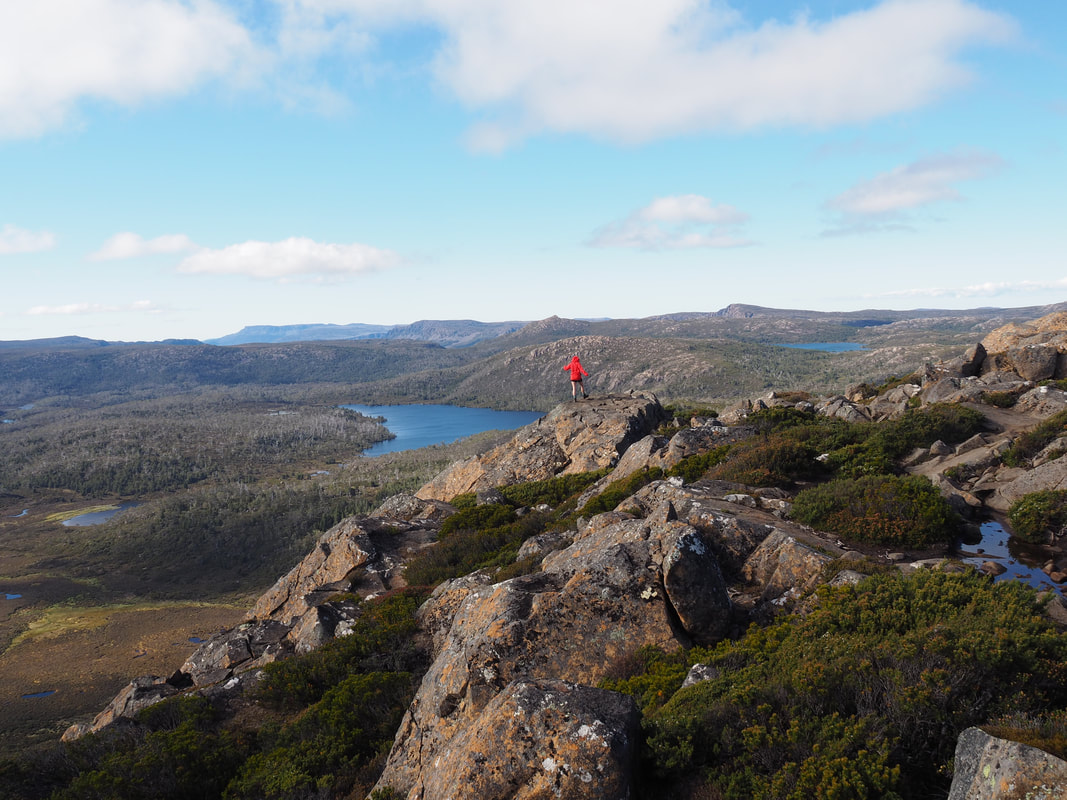 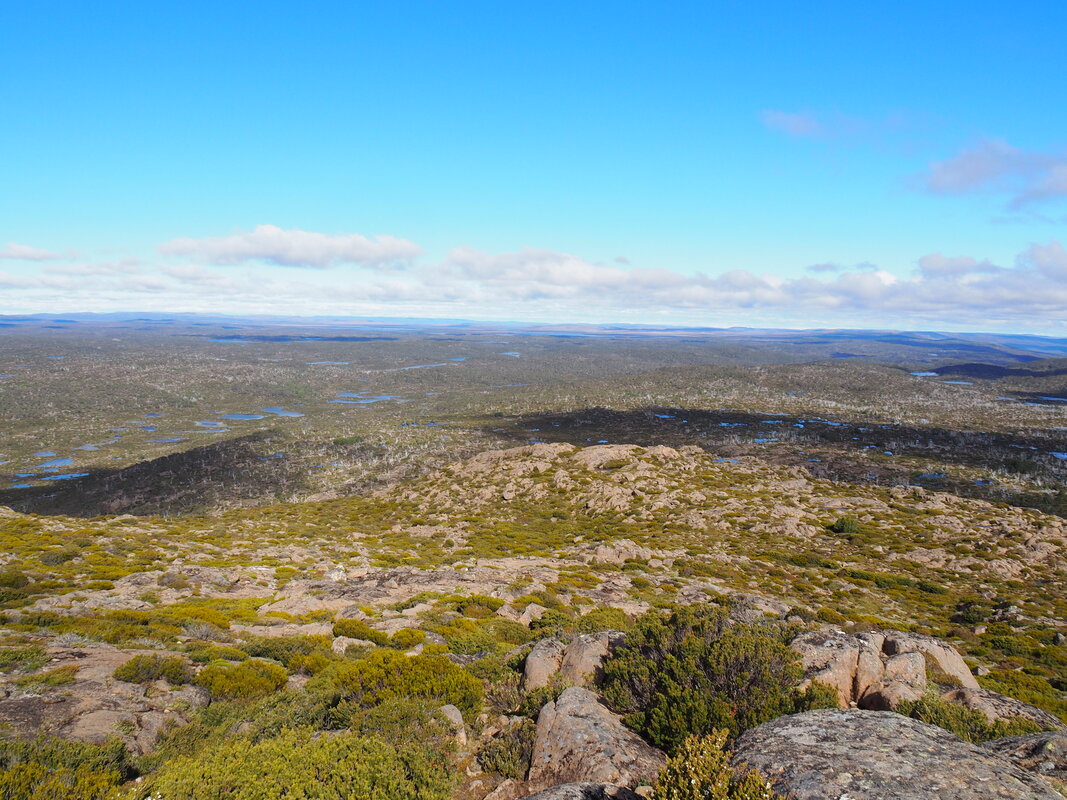 About The Walls of Jerusalem National Park and World Heritage Area

With thanks to the Tasmanian National Parks & Wildlife Service and Mole Creek Information for access to the following information...

This relatively small but stunningly beautiful park is located on a high plateau of dolerite peaks, and features alpine vegetation and endemic conifer forests.

The Walls of Jerusalem National Park is spectacular and remote high country, sculpted by glaciers thousands of years ago. This relatively small but stunningly beautiful park is located on a high plateau of dolerite peaks, and features alpine vegetation and endemic conifer forests. The Park is situated on the western side of the extensive central plateau of Tasmania, in approximately the centre of the island. Thousands of lakes formed by an ice cap during relatively recent glaciation cover the plateau and the features known as the Walls of Jerusalem are a series of higher, craggy hills. From a distance, these peaks seem to be the dominant feature but once within the Walls, in fact, the major features are the typically U-shaped glacial valleys and pretty lakes. Today, water remains an ever-present feature in the numerous lakes, tarns and trickling streams.

With no road access to its boundary, this alpine wonderland is for exploring on foot. The most visited part of the park is inside ‘the Walls’, flanked by towering fluted dolerite peaks. To get there from the carpark, it’s an initial steep walk up to the only formal campsite at Wild Dog Creek. From here on, it’s a gently undulating landscape, with dolerite peaks guarding an impossibly beautiful alpine garden. Here the gods have played, dropping generous dollops of lime green onto an olive-grey canvas, finishing with delicate strokes of pink, red, orange, gold and white.

The name Walls of Jerusalem appears on plans by surveyor James Scott dating back to 1849 and the biblical theme was taken up from the early days for park features, including Ephraims Gate, Zions Gate, Herods Gate (Saddle before Salome), Pool of Bethesda (tarn just before Damascus Gate), Pool of Siloam , Wailing Wall and The Temple.
READ MORE

Tasmanian Aboriginal people have had, and continue to have, a connection to the country where the Walls of Jerusalem is found. At the time of European arrival, this park was part of the territory of the Big River nation. Aboriginal people used a range of strategies to flourish in this sub-alpine and alpine environment, such as building shelters, using fire to manipulate the landscape, and sustainably managing the finite resources. Aboriginal heritage sites are present throughout the park, and today's community continue to connect with this cultural landscape.

Europeans first arrive in the area in the early 1800s, with the Central Highlands being used as a hiding place for bushrangers. By 1819, grazing licences were awarded and the high country became the domain of stock keepers. Just a decade later, the thousands-of-years-long occupation of this country by Aboriginal people ended, with the remaining Aborigines driven from their homelands by the ever-expanding settlers.

From the mid 1850s, the region was used during summer for cattle grazing, with bush huts and stockyards being built. Hunters and trappers roamed the plateau in winter, with the winter pelts of possum and wallaby superior to that from the lower regions. Trapper Reg Dixon built Dixons Kingdom Hut from local pencil pine in the 1930s. He and wife Elsie lived there from 1946, tending cattle that grazed in the walls.

The name Walls of Jerusalem was first found on an early plan by James Scott, based on his survey of the area in the mid 1800s. From the 1930s-1960s, Reg Hall, a Launceston barrister, made numerous visits to the area, awarding him the title in bushwalking circles as ‘The Weindorfer of the Walls’. Reg named more than a dozen features to continue the biblical theme started by Scott. (Halls Island on Lake Malbena is named for him.) Dick Reed, who helped build the huts at Lake Meston and Junction Lake, also spent considerable time in the area, promoting it’s beauty to others.

The Walls of Jerusalem National Park was proclaimed in 1981 and in 1982 it became part of the Tasmanian Wilderness World Heritage Area.

The Walls of Jerusalem National Park is now an integral part of the Tasmanian Wilderness World Heritage Area. In the last few years the Parks has seen an explosion of overnight hikers and is challenged by the fragile juggle of  visitation and preservation, especially of the stands of Pencil Pines.

The name Walls of Jerusalem appears on plans by surveyor James Scott dating back to 1849 and the biblical theme was taken up from the early days for park features, including Ephraims Gate, Zions Gate, Herods Gate, Pool of Bethesda, Pool of Siloam, Wailing Wall and The Temple.

Alpine landscapes are rare in Australia. The Tasmanian high country is one of the most unspoilt alpine areas in the world.

The prominent rock type in the park – Jurassic dolerite – forms its striking fluted peaks. These have intruded through a plateau that is older still, from Permian sediments laid down in a shallow sea. Most recently, during a series of Ice Ages, the land took its present form as glaciers carved their route, sculpting and smoothing.

This is harsh country for survival, with frequently freezing temperatures, heavy snowfalls and strong ice-bearing winds. Trees are stunted and conifers replace snow gums at about 1000 metres. Groves of thousand-year-old pencil pines are a precious feature in the park, however tragically many have been destroyed by fire. Elsewhere, herbfields, grasslands and heathlands prevail. Spectacular domes of lime-green and olive-green cushionplants hug the ground. In springtime, scoparia fields bloom crimson, pink, orange, gold and white. And in summer, mountain rockets’ seed capsules fire red. The Walls of Jerusalem puts on a flower show to make gardeners envious and artists reach for their brushes.

Amongst all this, the fauna is surprisingly diverse and abundant, cleverly adapting to the conditions. Wombats, wallabies, pademelons, possums, quolls, devils, echidnas, native rats, long-tailed mice, skinks, snakes, frogs and numerous insects all find food and shelter here. In the lakes and tarns live platypus, anaspides, galaxiids, frogs and burrowing crayfish.
We ask you to tread gently, remembering that we are visitor's to their habitats.

Help the The Walls of Jerusalem National Park!

There are some active volunteer groups who help to preserve & protect The Walls of Jerusalem National Park. We strongly encourage you to get involved!
MOUNTAIN HUTS PRESERVATION SOCIETY