I stood there at the tip of the Labillardiere Peninsula, looking south and sucking in deep lungfuls of sea-soaked air. Suddenly it hit me, this has to be some of the freshest air on the planet with only Antarctica out there, somewhere. I felt wild! - Hanny Allston 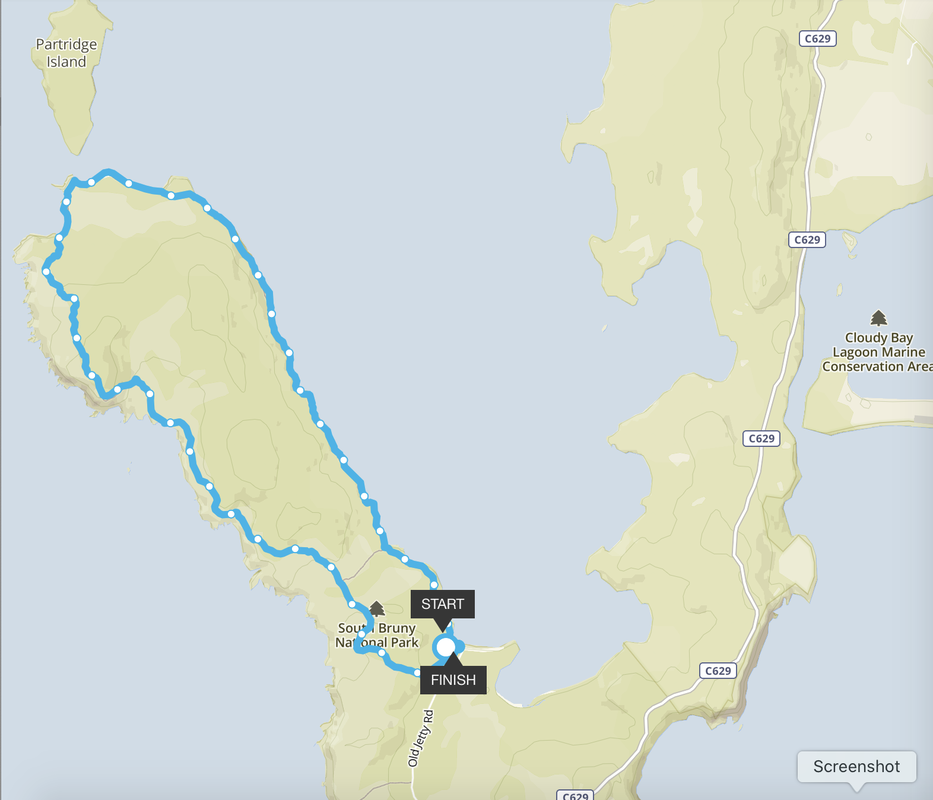 The Labillardiere Peninsula is situated in the South Bruny National Park and is one of the southern-most regions of the island. This route starts at the Jetty beach campground and completes a clockwise loop of the peninsula. Starting out on an old fire trail, you will progress down the western side of the peninsula which provides magnificent views of the D'Entrecasteaux Channel and the rugged mountains of Tasmania’s Southern Ranges. Here there are also deserted rock spree beaches to explore whilst southern swells crash onto the coastline. Continuing on, a steep but short climb up Mount Bleak to the highest point of the route is reached. From here you get your first views of Partridge Island, home to the rare and threatened Forty-Spotted Pardalote. This highpoint marks halfway of this route. At the tip of the peninsula you reach Butlers Beach where you will be rewarded with a close proximity to Partridge Island. From here you will then follow a beautiful, twisting single track through grassland and Eucalyptus forest along the eastern side of the peninsula back to Jetty Beach. This section of the trail is often teaming with birdlife such as sea eagles, bronze-cuckoos and black cockatoos.

D’Entrecasteaux, according to the French King’s orders, was:​
... to recommend to every person among the crews, to live in a good understanding with the natives, to endeavour to conciliate their friendship by a proper way of acting and respect; and must forbid them ... ever to employ force ... On every occasion ... act with great mildness and humanity ... His Majesty will look upon it as one of the most successful parts of the expedition that it may be terminated without costing the life of a single man.
That events in Paris would cost the king his own life, is one of the ironies of these instructions.
​
- 'The axe has never sounded', place, people and heritage of Recherche Bay, Tasmania; ​Mulvaney, D. J. (Derek John), 1925-

To their vexation of our early explorers, the Tasmanian indiginous inhabitants remained unseen. For D'Entrecasteaux, during most of their 1792 sojourn the barely sighted an aboriginal, although when they did they were quoted as saying, ‘The encounters we had with them later demonstrated that they are kind, without mistrust.’ Wherever expeditioners moved they saw ample proof of occupancy, including hearths, discarded utensils and artefacts, brush shelters, shell refuse, distant smoke and many tracks, which they followed to negotiate thick woodland. Yet the people remained concealed. This was a behavioural practice common to this region. When Tobias Furneaux anchored in Adventure Bay for five days during 1773, not a single inhabitant appeared. James Cook was there for two days in 1777 before people arrived, while Bligh waited vainly for 11 days in 1788, failing to meet anybody at close quarters before he sailed onwards.

The records of the d’Entrecasteaux and Baudin expeditions provide much vital data concerning Tasmanian traditional life at the time of contact. We now know that Bruny Island was home to the Nuenonne band. Related groups of families constituted a band, numbering up to 70 or 80 persons. Marriage took place between the Nuenonne band on Bruny and the Lyluequonny of Recherche Bay. Together with perhaps five other D’Entrecasteaux Channel bands north to the Derwent estuary, these people were the most maritime adapted Tasmanians. In recent times they are known as the Palawa. They crossed the waters between the islands and the mainland in craft made of eucalyptus bark lashed together in rolls.

There is a wonderful book written by Derek John Mulvaney called 'The axe has never sounded', place, people and heritage of Recherche Bay, Tasmania. It is free to download and a fascinating insight into this area. We highlighy recommend reading if you can.
READ 'THE AXE HAS NEVER SOUNDED'

Recherche Bay is at the southern tip of Tasmania and is a place of amazing natural beauty combined with a rich, exciting human history. From the early aboriginal inhabitants to the European explorers, then laster the British colonisations, whaling stations, sawmills, coal mines, pubs and piracy... the landscape has seen it all! Yet, today, the naturalness of its setting remains remarkable unchanged.

In 1792, French Vice-Admiral Bruny d’Entrecasteaux brought his two ships Recherche and Espérance to anchor in the bay. ‘It will be difficult to describe my feelings at the sight of the solitary harbour situated at the extremes of the world, so perfectly enclosed that one feels separated from the rest of the universe,’ he wrote.
After their storm-tossed journey to this southern land, the ships and the 219 seamen, officers and scientists aboard recovered from scurvy and distemper at Recherche Bay. It provided fish, greens, fresh water, timber for repairs and an intriguing natural environment to study. A year later, after circumnavigating Australia, the d’Entrecasteaux expedition returned to Recherche Bay and this time met up with local Aboriginal people. The French diaries record the unfolding, friendly investigation of each other by these totally different peoples from opposite ends of the globe.

By 2003, many local Tasmanians believed that Recherche Bay needed rescuing. In a race against time and government indifference, many locals banded together to raise the alarm. Soon there were protest rallies in Hobart and a rising chorus of national and international concern.

With support from many individuals, including Emeritus Professor John Mulvaney, Founding Professor of Prehistory at The Australian National University, and a world-renowned authority on Indigenous and cultural heritage, philanthropists Dick and Pip Smith were able to privately purchase the peninsula. That guaranteed the forest’s survival as a centrepiece of the Recherche Bay region of which Labillardiere is a central feature too. It is hoped one day to include Recherche Bay into the Tasmanian Wilderness World Heritage Area.

The plant communities in the South Bruny National Park are of high conservation value due to the occurrence of geographically significant species endemic to the island and not protected by reserves or parks elsewhere in Tasmania. On the Peninsula there are thriving dry sclerophyll communities such as eucalypt woodland, as well as heathland and coastal communities. The national park contains several rare, endemic orchid species including the endangered chestnut leek orchid (Prasophyllum castaneum) and the pretty leek orchid (Prasophyllum pulchellum), both of which are of high ecological significance due to their rare occurrence. These species generally occur in heathland communities.

Eucalyptus forests within the national park play an important role in creating habitat for many species of insects, birds and mammals. Common species are brown-top stringy bark (Eucalyptus oblique) with pockets of white gum (Eucalyptus viminalis), blue gum (Eucalyptus globules ) and white peppermint (Eucalyptus pulchella). The eyebright (Euphrasia fragosa) is another species of particular note; the park is one of the few places the plant occurs with only three other known populations, and is the only place where it is protected in a national park or reserve. The eyebright is a small flowering perennial occurring in open woodland and is highly vulnerable to disturbance where it exists on vehicle tracks and grazing areas.
We ask you to tread gently, remembering that we are visitor's to their habitats.

How can welp Bruny Island​?

If you know an active volunteer program working in the South Bruny Island National Park then we would love to hear from you!
Contact us