Cradle Mountain–Lake St Clair National Park, with its ancient rainforests and alpine heaths, is home to the world-famous Overland Track and iconic Cradle Mountain. Part of the Tasmanian Wilderness World Heritage Area, the park is one of the state's most special places, where ancient pines fringe  glacial lakes and icy streams cascade down rugged mountains. Dramatic Cradle Mountain is the rugged jewel of the park. - Discover Tasmania 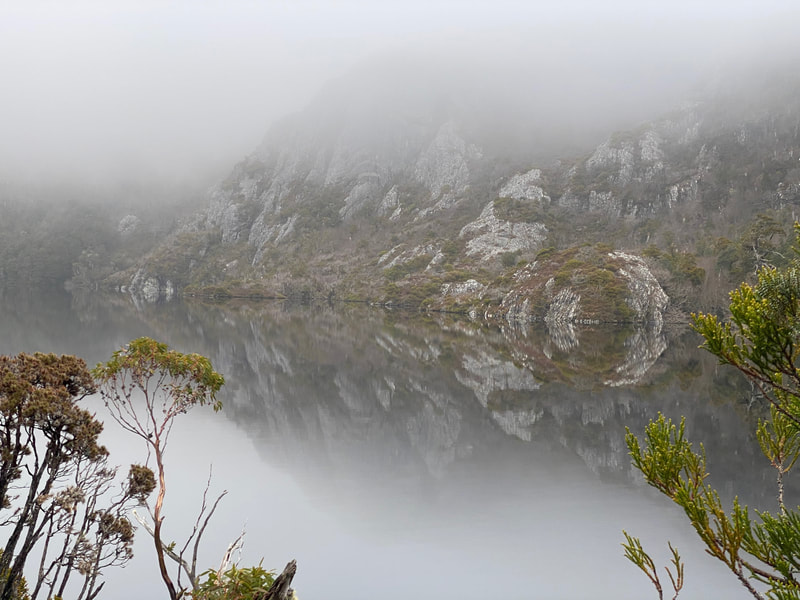 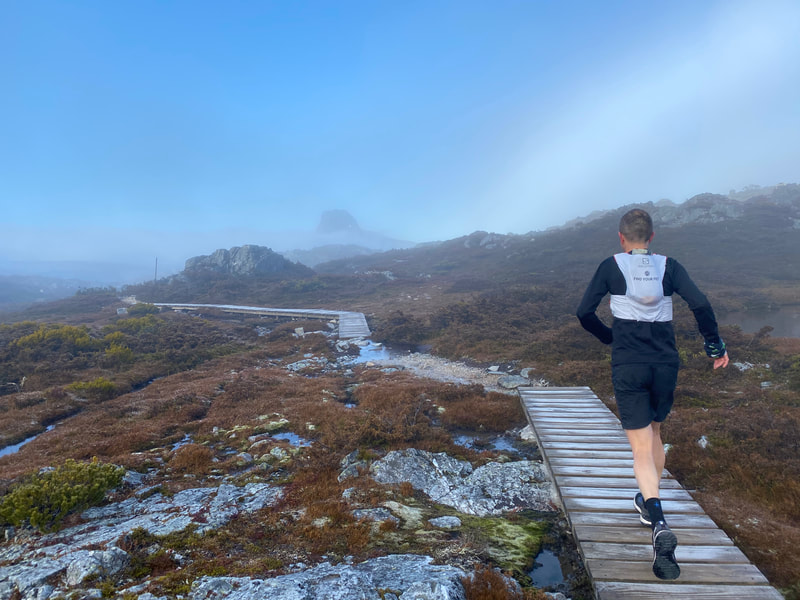 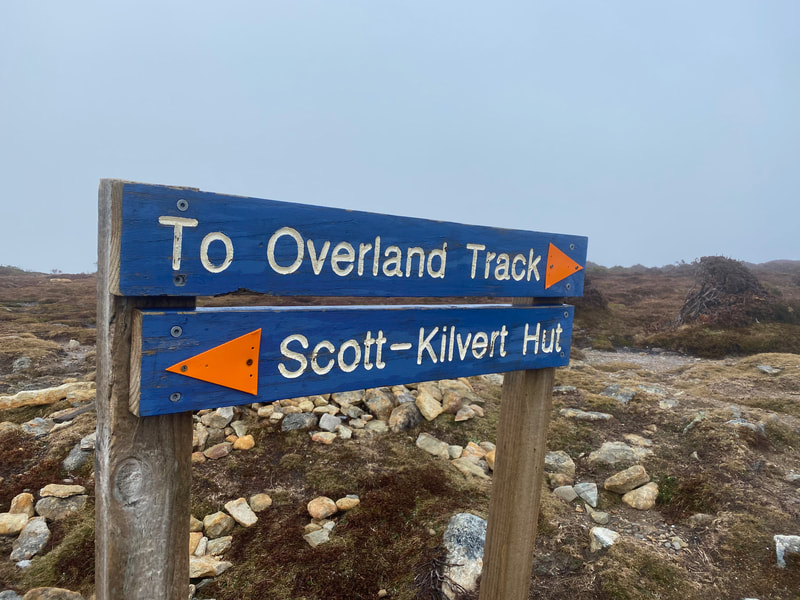 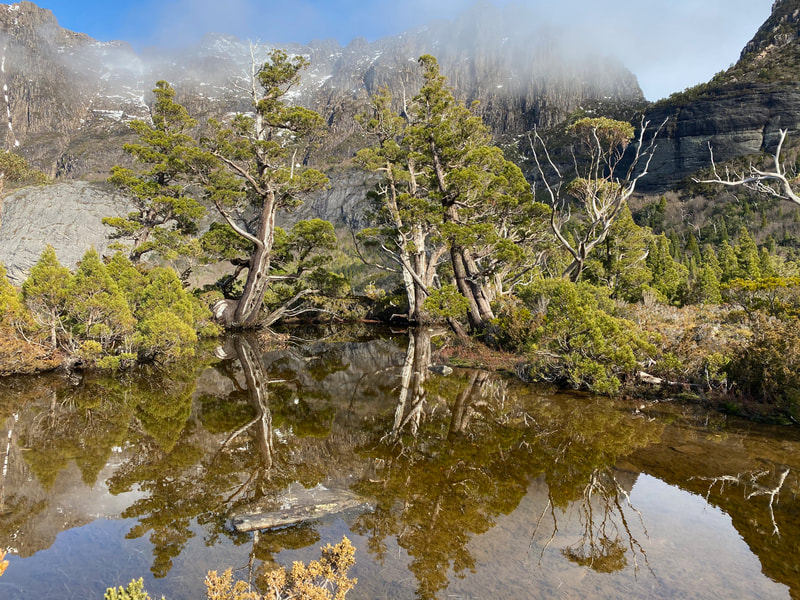 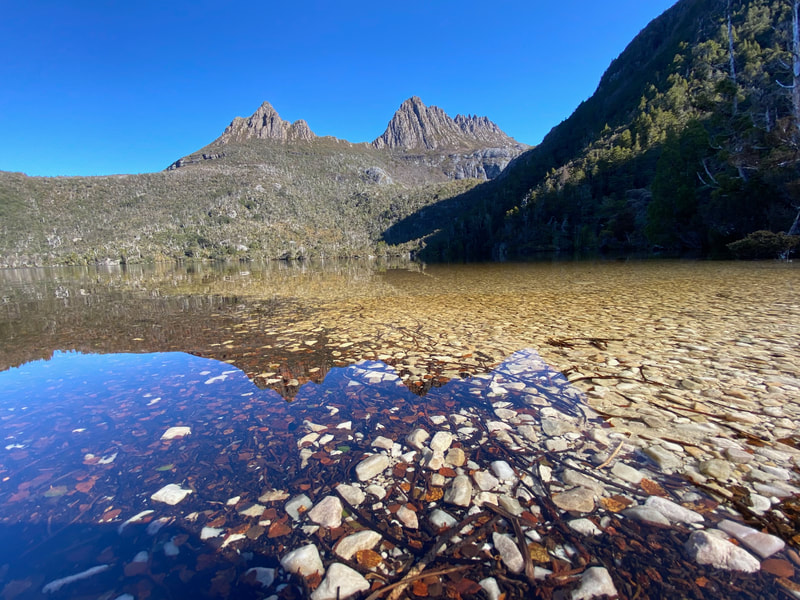 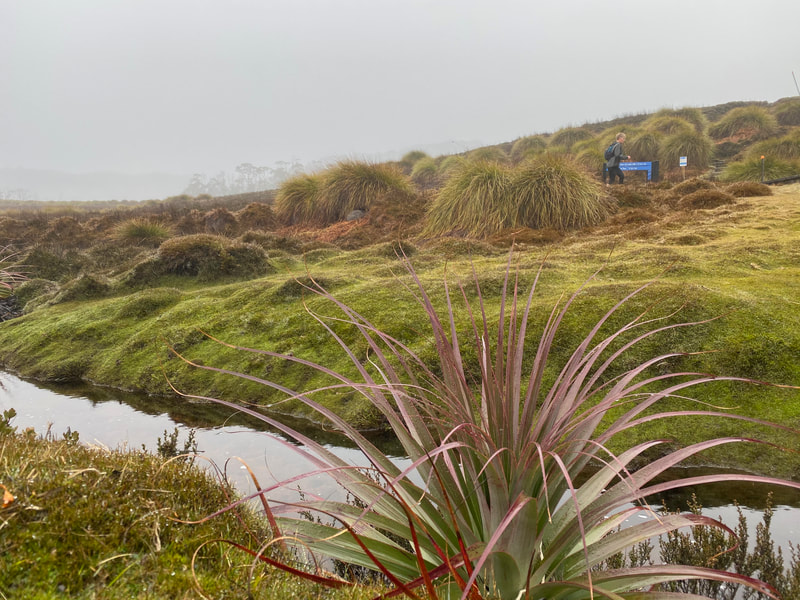 Start and Finish Facilities
Toilets  No - nearest toilets are at the Cradle Mountain Visitor Centre
Water  Not that we would recommend drinking. Please bring your own. Closest water is on the trail well away from the hiking trail and from fast flowing steams.
Parking  No. After 8am all access to this trail requires a shuttle bus from the Cradle Mountain Visitor Centre. Prior to 8am you can drive your own vehicle to Ronney Creek so long as there is space available in the Park. To depart you must follow a shuttle bus. We strongly encourage all participants to use the free shuttle bus service.
Services  The closest services are located at the Cradle Mountain Visitor Centre or Discovery Caravan Park where there are some small cafes and basic convenience stores.
Phone coverage  Very patchy Telstra & Optus reception.
Concluded the route? Don't forget to get your completion badge or lapel pin!
GET YOUR COMPLETION BADGE OR PIN! 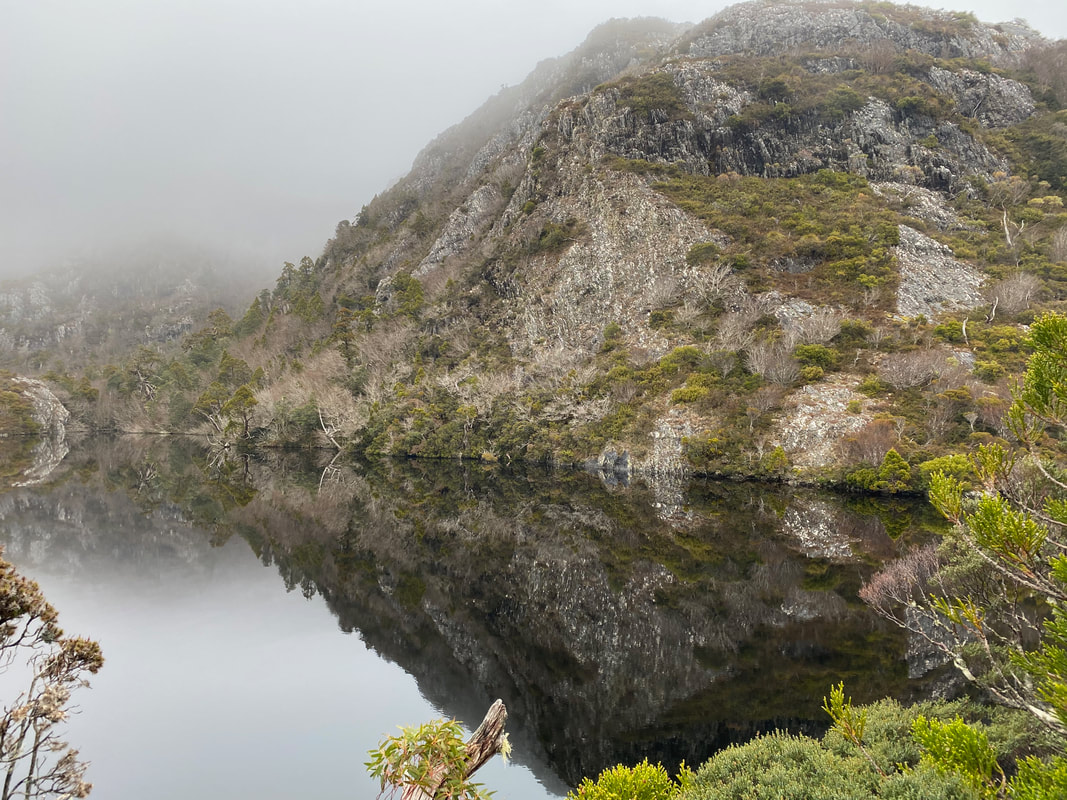 Reflections at Crater Lake on the climb to the Cradle Plateau 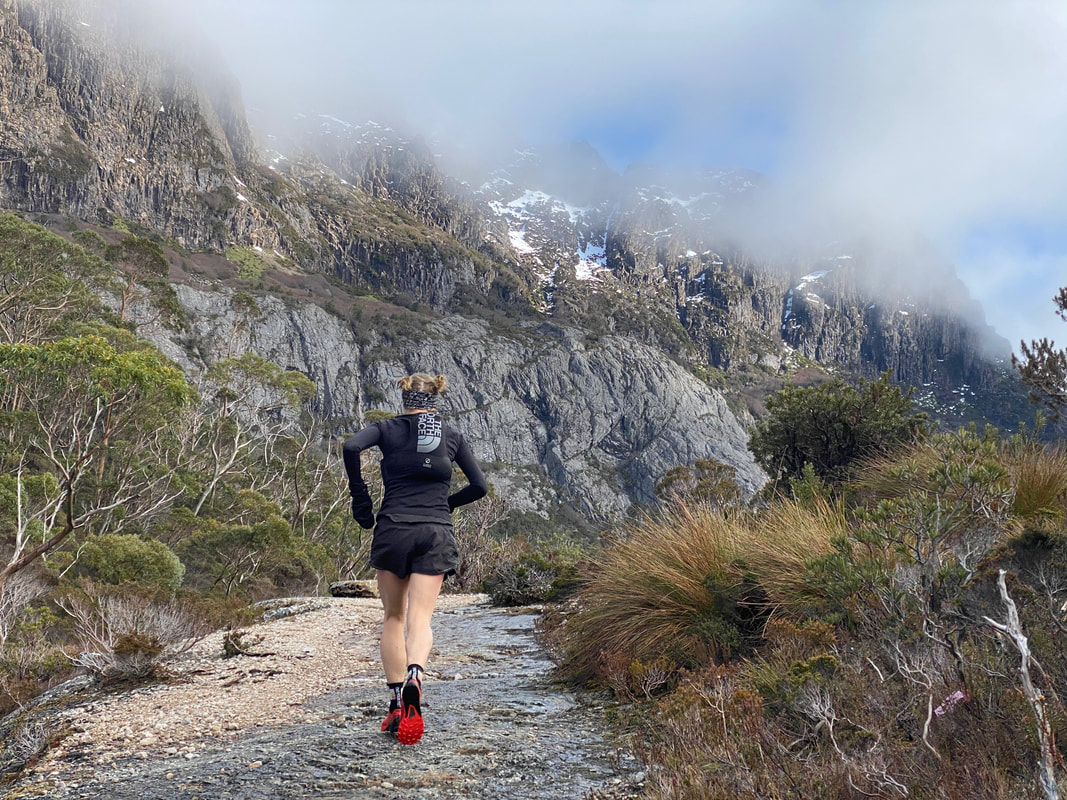 Traversing under the western slopes of Cradle Mountain on the famous Overland Track.

Iconic Cradle Mountain is a place of exceptional natural beauty in the heart of the Tasmanian Wilderness World Heritage Area. From moss-covered ancient rainforests and deep river gorges to snow-covered mountain peaks, wild alpine moorlands and glacial lakes, the park is revered for its diverse and breath-taking landscapes.

A place for all seasons, discover deep snowdrifts in winter, spectacular displays of yellows, oranges and reds across the mountain slopes in autumn as Tasmania’s deciduous Fagus turns colour, playful young joeys & hungry echidnas emerging in spring, and the fragrance of wildflowers filling the air as you dip your toe into a crystal-clear lake on a summer’s day.
​
Cradle Mountain is synonymous with nature, wilderness and all things pristine. Wildlife is in abundance in this spectacular national park, giving opportunity to encounter Tasmanian devils, quolls, platypus, echidna, wombats and the highly inquisitive black currawong.

It is now understood that the Tasmanian Aboriginal people have been part of this land for more than 35,000 years. Sometime during the last ice age, Aboriginal tribes crossed the land bridge spanning Bass Strait from 'mainland Australia', becoming the most southerly-dwelling humans on Earth. When the glaciers retreated and sea levels rose around 12,000 years ago, helping to carve out much of the Cradle Mountain landscape that we enjoy today, Tasmanian Aboriginals became isolated from the mainland, developing a unique and rich culture.

With regards to the aboriginal habitation in the Cradle Mountain area, their occupation of the region has been dated from the end of the last ice age, between 10,000 and 12,000 years ago. Prior to European settlement, Cradle Mountain was the territory of the Big River Tribe. Due to the nature of the inclement weather conditions, it is thought that Aboriginal people did not live in this challenging alpine environment permanently, but rather travelled to the area’s fertile, sub-alpine valleys during summer on seasonal hunting trips.

Throughout the Cradle Valley, Aboriginal sites, or living areas, have been identified through the presence of stone tools, rock shelters or caves that show evidence of human use, and quarry sites where stone was sourced for tool making. Reports from early European settlers also describe well-constructed bark huts and evidence of burning vegetation to attract prey. Today these living areas carry enormous significance to the Tasmanian Aboriginal community. For the world, they demonstrate the incredible adaptability and resilience of the individuals who where able to survive and live here in isolation during the most recent glacial period.

Cradle Mountain now sits between the Big River and Northern Tasmanian Aboriginal nations. Aboriginal Tasmanians were persecuted by the European settlers upon their arrival, and the last free Aboriginals in the area were seen just south of Cradle Mountain in 1836. The Aboriginal sites within Cradle Mountain-Lake St Clair National Park are evidence of tens of thousands of years of continuous history and connection with this land, and are wholly protected within the Tasmanian Wilderness World Heritage Area.

This must be a national park for the people for all time. It is magnificent, and people must know about it and enjoy it. - Gustav Weindorfer

Europeans first explored, and climbed, Cradle Mountain in 1827 and 1828 with Joseph Fossey and Henry Hellyer surveying for the Van Diemen's Land Company.

Trappers worked in the area from the 1860s until the collapse of the fur trade in the 1950s, although hunting in the park was declared illegal after 1927. They established huts, including Du Cane and Pine Valley, and burned the land to encourage fresh growth and game. Scars of fire are still evident throughout Cradle Valley today, although thankfully there are still large stands of King Billy Pine remaining in the Ronney Creek & Waldheim areas.

The Cradle Valley was subject to extensive natural degredation prior to its preservation. A large expanse of King Billy pines were found by James Smith in 1863, and the area was logged until the 1910s. Smith's son continued logging the area on private (but National Park adjacent) land from 1943 to the 1972, thankfully ending after significant public protest. Cattle and sheep also grazed in Cradle Valley from 1910 to 1930. Further proposals for the area varied from large mines and railways, to farms and plantations.

However, it was the vision of Austrian-born Gustav Weindorfer and his wife Kate which ultimately led to Cradle Mountain being declared a national park. In the 1910s Gustav and Kate Weindorfer climbed Cradle Mountain. They found the land beautiful and Gustav proclaimed "This must be a national park for the people for all time. It is magnificent, and people must know about it and enjoy it".

They began campaigning for the area from Cradle Mountain to Lake St Clair to be a national park, and set up a popular chalet the next year. It was declared a scenic reserve in 1922, a wildlife reserve in 1927 and its current designation of national park from 1947. During this transition former trappers began building huts and guiding bushwalkers, including Paddy Hartnett, Weindorfer and Bob Quaile.

In 1931 fur trapper Bert Nichols blazed the Overland Track starting from Cradle Mountain and heading south to Lake St Clair. By 1935 it was consolidated and used by independent walking parties.

Cradle Mountain–Lake St Clair National Park became a part of the Tasmanian Wilderness World Heritage Area in 1982. In the last few years Cradle Mountain has seen an explosion of visitors and is challenged by the fragile juggle of preservation and visitation.

Their (Gustav & Kate's) love story unfolded in the Tasmanian wilderness a century ago. What would this pioneering pair make of Cradle Mountain now? - Kate Legge, The Australian

The Cradle Mountain region is an area of marked geological contrasts, shaped by glacial erosion and deposition over the past two million years. The various glaciers that covered the area have left behind a variety of glacial features, including the valley of the Dove River, and numerous lakes and tarns.

Cradle Mountain comprises a diverse mosaic of vegetation communities, from rainforest to buttongrass moorlands. The area contains ancient plants of Gondwanan origins, including long-lived endemic conifers such as the King Billy pine, pencil pine and celery-top pine, as well as Tasmania's deciduous beech (fagus), which colours the hillsides each autumn.

The area's Gondwanan heritage is further revealed through the existence of species such as velvet worms, fish in the family Galaxiidae, aquatic insects and crustaceans. Other invertebrates, such as the pencil pine moth, reveal even more ancient links to the super-continent Pangea.

Cradle Mountain contains a wide range of habitats and is home to some of the world's largest carnivorous marsupials – the Tasmanian devil, spotted-tailed quoll and eastern quoll – as well as wombats, platypus and echidna.
We ask you to tread gently, remembering that we are visitor's to their habitats.