DIALLED IN AT PENGUIN

South of Penguin rise the prominent cliffs and peaks of the Dial Range. This range is a chain of mountains and valleys given its name because of the silhouette of one of its summits, the Gnomon, which resembles an ancient sundial. The highest peak in the range is Mount Duncan from which you can gain beautiful views towards Table Cape, Mount Roland and greater North-West Tasmania.

Overview
Difficulty Level 2, Playing Wilder
Duration 3-4hrs
Distance21.2km
Ascent/Descent  1160m
Terrain Flowing trails with some stretches of rocky terrain. Gentle climbs and fast flowing descents. Mud in regions after rain.
​
The Route Start and Finish Facilities
Toilets No - nearest toilets are in the township of Penguin.
Water No.
Parking   Yes.
Services The closest services are located in Penguin where there are cafes, a supermarket and a chemist.
Phone coverage Patchy Telstra, Vodafone & Optus reception.
Concluded the route? Don't forget to get your completion badge or lapel pin!
GET YOUR COMPLETION BADGE OR PIN!

South of Penguin rise the prominent cliffs and peaks of the Dial Range. This multiple-use forest area has an emphasis on endurance activities and provides for a wide variety of recreational pursuits, including individual trails for walking, mountain biking, trail biking and horse riding. This makes it an ideal place for trail runners to huff puff up the hills and then whoop their way back down through the ferny glades. From the tops of the peaks you can catch vast vistas to the north-western coastline and township of Penguin far below. The region is also famous for the Penguin Cradle Trail, a 6-7 day hike from Penguin south to Cradle Mountain established in the 1970s, and which at its beginning passes through the eastern side of the Dial Range. For this section, you can enjoy an amble through tall eucalypt forests and lush fern understories on an old tramway next to the magnificent Leven River. Our Wilder Trails route will showcase some of this spectacular trail and it will have your toes tingling to return and hike it in its entirity.

The route begins at the main carpark of the Dial Ranges which is situated on Montgomery Road just outside of the heart of Penguin. Following flowing mountain bike tracks up Myrtle Creek, the route leads you to the top of Mount Montgomery where there are spectacular views to be had. From here you will meander down to the Leven River and the Penguin Cradle Trail, before climbing back up to Myrtle Creek for a flowing, fast descent back to the carpark.

Please note, a small section of our Dialled in at Penguin Wilder Trail is multiuse with mountain bikes. Some of the route is on fire trails and small gravel roads which may have vehicles from time to time. The Penguin Cradle Trail also allows horses although we would be surprised if you bump into one on this section of trail. However, given the multiuse nature of the area, please remain alert for others users on the trails. 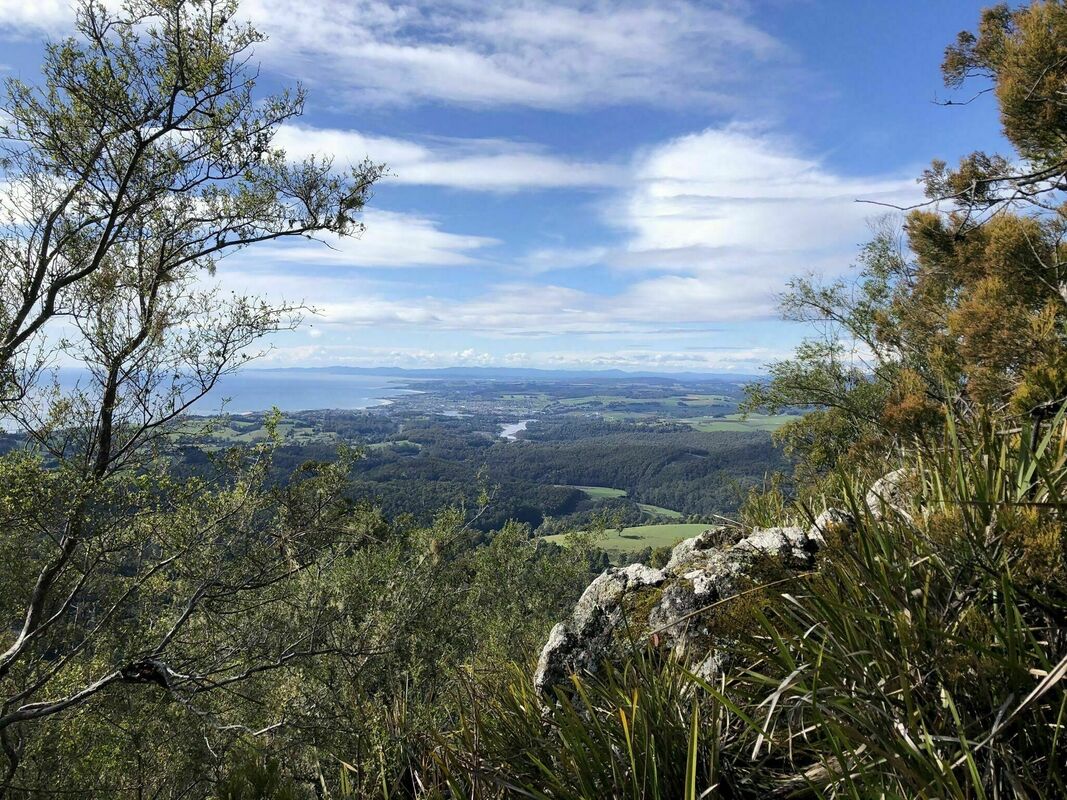 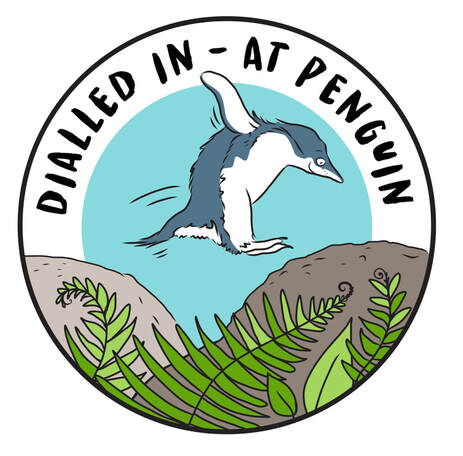 About The Dial Ranges & Penguin region

The Big Penguin, which Penguin is home to, was made of ferro cement by the Goliath Cement Co of Railton and later coated with fibreglass, is located in the town’s centre opposite the Post Office. Unveiled on 25 October 1975, it was erected to commemorate the centenary of the naming of the town. Concerns were raised in 2008 as to the possibility of asbestos contamination, but the Big Penguin was given the all clear. It is also interesting to note that all street rubbish bins are decorated with ornamental cement fairy penguins.

Penguin is a picturesque seaside town with a stunning esplanade, surrounding scenic walking trails, interesting coastline and a quirky collection of penguins on the street... including the giant penguin, a 10-foot penguin that makes a quirky photo opportunity. Yes, wedged onto the edge of Bass Strait, Penguin adopted its name from a nearby penguin rookery and when you visit you will see the locals are very passionate about these creatures. At the right time of year, you can see the penguins each night at Penguin Point.

On Sundays, Penguin hosts Tasmania's largest undercover market with more than 200 stalls selling food and wine, woodcraft and second-hand goods. This could be the perfect post adventure activity! Afterwards, you may like to take the coastal road between Ulverstone and Wynyard which is a scenic drive with sweeping ocean views, great picnics spots and ideallic swimming beaches. In Penguin, there are plenty of eateries and places to stay too.

Penguin was first settled in 1861 as a timber town, and proclaimed on 25 October 1875. The area's dense bushland and easy access to the sea led to Penguin becoming a significant port town, with large quantities of timber shipped across Bass Strait to Victoria, where the 1850s gold rushes were taking place.

Penguin was one of the last districts settled along the North West coast of Tasmania, possibly because of an absence of a river for safe anchorage. Nearly all travel in those days was by boat as bush made the land almost impenetrable to foot travellers. Many of the settlers probably travelled via the coast from Launcestont. Trade began when the wharf was built in 1870, allowing timber and potatoes to be exported. Penguin Silver Mine, along the foreshore slightly to the east of the town opened in 1870 but failed a year later. Neptune Mine, a tad further along, likewise failed. A rail line between Penguin & Ulverstone was established in 1901.  ​Currently, Penguin has 30 heritage-listed sites as well as many upgrades to its original facades.

​The European history of the Dial Range is linked principally to the early prospecting that occurred within the area, with much of the nomenclature of public names reflecting this past history.

Approximately 12,000 years ago the island of Tasmania was separated from mainland Australia. By European arrival in 1803 some 4,000-5,000 semi-nomadic Aboriginal people continued to manage this diverse and changing landscape, both responding to and manipulating the environment.

There were approximately 48 groups contained within nine socio-linguistic cohorts throughout Tasmania, speaking at least 4 distinct languages. The Northern people comprised 3 or possibly 4 groups, totaling 200-300 people. Their lands extended along the coast from Port Sorell to Penguin, inland to the SE corner of the Surrey Hills then East to the base of the Great Western Tiers near Quamby Bluff before turning north to the coast. Each winter the Northern people abandoned the cold of the Western Tiers and the flooded flats of the Meander Valley and traveled to the coast where they would congregate at sites such as Port Sorell at Panatana. The Northern people also had access to some of the most important ochre deposits in Tasmania. Excavations undertaken during the 1980s at the Gog Range mine, now called Toolumbunner, dated activity at this particular mine site back to the 15th century.

Colonisation of the North and North West of Van Diemen’s Land was a particularly violent process - far away from the scrutiny of the colonial administration in Hobart. Thirty-two significant incidents of violence have been identified between 1826 and 1834, mostly taking place in the 1827/8 period. Twenty-eight people are known to have been captured by Colonial Authorities while eight were kidnapped by sealers. By 1847, when the 47 surviving Aborigines were transferred from Flinders Island to Oyster Cove, there were no Northern people left alive.

The Dial Range, like much of the north west coast, has a temperate marine climate characterised by mild winters and cool summers. The geology of the Dial Range is complex with rock types having been formed during the Pre Cambrian, Cambrian and Ordovician geological periods. The rugged landscape reflects the series of folding and fault movements across the region. A botanical survey undertaken by Parks and Wildlife Service identified 59 different flora species in the Mount Montgomery State Reserve. Rare or vulnerable plants found in the region include variable sallow wattle, stately helmet orchid, gristle fern, small rasp-fern, and slender knotweed. Other notable species include:
​The diversity of habitat found within the Range is likely to encourage a high diversity of bird species. The bushland is also likely to support a variety of native invertebrates and mammals.
We ask you to tread gently, remembering that we are visitor's to their habitats.

There are some active volunteer groups who help to preserve & protect the Dial Ranges and Penguin Cradle Trails. We strongly encourage you to get involved!